Department of entomology at MRI was established at the start of MRI in and it is currently well established unit which actively involved in entomological field as well as inhouse activities.

Team of the Department of Entomology 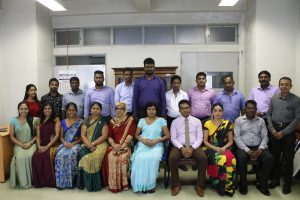 Research on mosquito vectors of disease is the main activity of the department. This department  also conducts disease vector surveillance for dengue  haemorrhagic fever and Japanese Encephalitis to guide the health authorities in implementing successful vector control programmes. Special investigations on vector born disease problems are undertaken as and when requested by the Ministry of Health in order to assist in controlling epidemics. The staff is actively engaged in field studies in addition to laboratory work.
Read More….

Division of Medical Entomolog
Medical Entomology formally commenced in the then Department of Medical and Sanitary Services (DM&SS) with the establishment of the Division of Medical Entomology (DME) after the arrival of Mr Henry Francis Carter from the University of Liverpool around 1920. He was appointed as malariologist and carried out pioneer work on malaria vectors in Ceylon.  He realised the urgen
cy to work out the taxonomy of anopheline fauna of Ceylon and this was his first study. It resulted in the pioneer publication on the Taxonomy of Anopheline fauna of Ceylon  {Carter H.F., 1950b. ceylon mosquitoes; List of species and names of mosquitoes recorded from Ceylon. Ceylon J.Sc. (B) 24 (2): 85-115}
Read More….

Sri Lanka patents
Sri Lanka patent was obtained on the 27/03/2007  for the following invention(patent No. 14438)
Title of the invention –  Biological control agent containing Bacillus turingiensis . Sri Lankan isolate for the control of mosquito larva